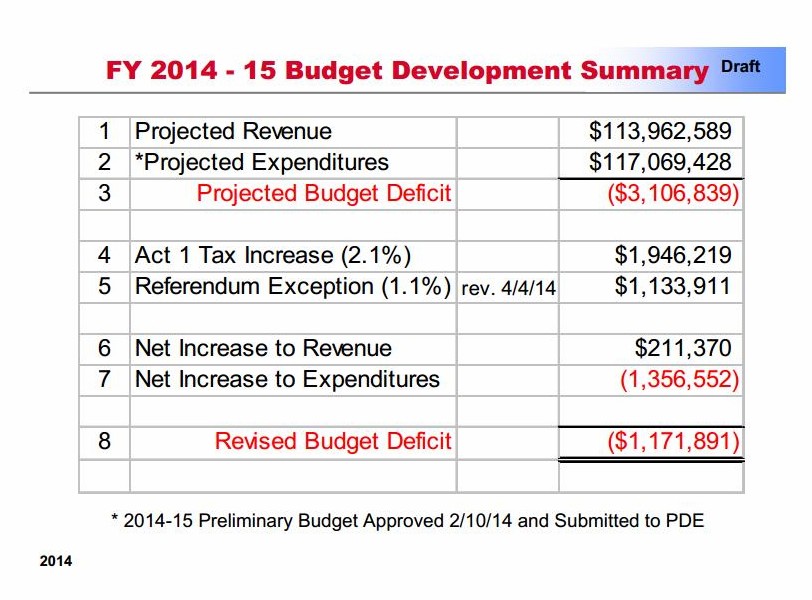 Once the revenue and expenditures projections for the 2013-14 school year are in, it will be interesting to see if the District ‘finds’ surplus dollars. If you recall, the District has found mega-millions in surplus the last two years in a row. Unfortunately, for taxpayers, each year the money has been ‘found’ until after the next year’s budget was passed (with a tax increase).

The budget surplus was $3.9 million for the 2011-12 school year and nearly $5 million for 2012-13 school year. It’s never been entirely clear what caused the budget surplus these last two years although I do recall that “lower than anticipated insurance costs” was used to explain a portion of the surplus. I have to believe that the Board would not approve a 3.2% increase for the taxpayers only to discover a budget surplus for the third year in a row. Not sure that there could be a valid explanation if that were to happen.

Another couple of notes from last night’s meeting. In the update from the Public Information committee meeting, Scott Dorsey announced that the process by which the public asks questions at School Board meetings and the Board responds has moved to the Policy Committee for further discussion. The next Policy Committee meeting is Friday May 9 at 12:45 PM at TEAO.

School Board President Kevin Buraks formally announced that Supt. Dan Waters will retire at the end of his current contract which ends June 30, 2015. Regardless of how people personally feel about Waters, his time remaining on the job is winding down – a little over a year left on his contract. As announced by Buraks, there is discussion underway about the process/search to hire his replacement. It appears that the Board will be utilizing the experiences of Jeanne Pocalyko, the new Personnel Direct, in conducting the search.

A note on the TESD Superintendent search from last night’s Board meeting. A Board Search Committee has been appointed. Members I think: Graham, Cruickshank, Bruce, Carlson but I could have missed someone over the general hubbub at the beginning of the meeting. There will be a survey to get public input sometime in May.

I wonder if they will ask meaningful questions: eg: From inside or outside the district? Re the above, definitely or preferably? Experience as a Superintendent? Rank a given set of possible selection criteria in order of importance? (Or, rate importance of the criteria, but all could be 10 out of 10). Criteria such as: experience in a high performing district; track record of improving educational results; track record of meeting budget; demonstrated public communication expertise; employee satisfaction results, and so on.

In her prior position at Dallastown Area School District (DASD, Pocalyko and the Superintendent search committee took a ‘community engagement’ approach and included administrators, teachers, parents, support staff, students, community and committee members in the effort. Although ultimately the final determination and selection of the new Superintendent remained the responsibility of the DASD Board, the decision process included the compilation of stakeholder feedback, interview results and comments from each interview round, reference checks and the school board’s consideration of district needs and input from the Committee.