What: Teachers and educators of the Tredyffrin/Easttown Education Association (TEEA) are holding an Informational Picket before the next School Board meeting to protest their lack of a new collective bargaining agreement (CBA). The CBA expired, June 30, 2017 and both parties met one time over the entire summer. The membership is frustrated by the lack of progress in one of Pennsylvania’s premier school districts. Conestoga High Schools was recently ranked the best high school in all of Pennsylvania.

Who: Hundreds of Teachers, Parents and Educational staff of TESD School District.
Visual Highlights: Teachers will assemble prior to the School Board meeting, holding signs and marching and chanting for a new contract. Community members and families are invited.

Statement by TEEA President, Dr. Bob DeSipio:
“Our contract expired on July 1, 2017. Despite multiple offerings to meet with the School Board this summer to continue the negotiations process, we did not meet until the end of August. We want the School Board to know that it is not just the five or six of us on the bargaining team that are upset with the slow pace of these negotiations, but a membership of more than 400 highly educated and highly dedicated educators. We hope tonight’s Board meeting is a demonstration to the District that TEEA is resolute in our dedication to achieve a new agreement and want to reach a fair and competitive settlement as quickly as possible.”

Dr. DeSipio’s statement is confusing and unsettling – although the teachers’ contract expired June 30, 2017, the District held no negotiating meetings during the summer! No contract negotiation meetings between the District and the teachers union “until the end of August”! This makes no sense.

It is impossible for the community “to take a side” in the contract negotiation battle between the school district and the teachers union. Why? Because the taxpayers have received no information from either side about the offers/demands.

The teachers are asking for a “fair and competitive settlement” … wish I knew the offer on the table. The public cannot possibly know what is “fair” without knowing the contents of the offer.

The secret negotiations between the District and the teachers union once again underscore the need for transparency.

Getting the state union officials from PSEA involved, the T/E teachers will show solidarity with signs, marching and chanting on Monday night before the school board meeting. Working without a settled contract is difficult but isn’t this “informational picket” apt to make the contract negotiation situation more contentious?

Other area districts started the 2017-18 school year without settled contracts – Lower Merion, Methacton, Coatesville, Springfield in Delaware County. And we learned this week that Lower Merion Education Association has mounted a PR campaign, including an online petition asking the public to sign “and show the School Board that you a support a fair contract for Lower Merion School District teachers and staff.” Drumming up community support for a salary increase in Lower Merion may prove challenging; given that LMSD has the highest paid teachers in Pennsylvania. (average salary is $99,253).

Below is a letter Dr. Robert DeSipio, TEEA President which was posted on its website yesterday. In reading the letter, it is obvious that the teacher contract negotiations between the District and the teachers are stalled. I suggest that both sides need to “open the door” – this “cloaked in secrecy” approach to the negotiations by the School Board is not working and is showing signs of cracking. The public deserves to see the sunlight shine on the negotiations – it would help the parents, taxpayers (and employees) better understand the process and the District’s priorities.

It’s time to turn on the lights, open the windows and the doors.

A Fair Contract for TEEA, the Tredyffrin-Easttown Education Association

The teachers of the Tredyffrin-Easttown School District are currently working without a contract and it is a shame; a shame in many ways. The TEEA teachers are an enormously talented, dedicated group of educators who go beyond the expected and deliver the unexpected. Conestoga High School has been ranked the number one public high school in Pennsylvania for the last two years. Accolades of that magnitude and a number one ranking in the state are not only a reflection of the quality of education at the secondary level, but are also a testament to the dedication of the middle and elementary school teachers who prepare the students in their younger years. From top to bottom the TEEA teachers are top-notch and they deserve a fair contract!

A fair contract means the employer is not asking its employees to pay for his/her own increase in salary; certainly not contract after contract after contract. When the recession of 2008 wreaked havoc on the economy, the TEEA teachers stepped to the plate. We agreed to break the contract that was in place and under which we were working and accepted a half year salary freeze, giving back one million dollars to the district. One million dollars that had been earmarked for teacher salaries instead went into increasing the district’s fund balance. When that contract expired, we continued to give back as the economy struggled to recover from the recession. From 2012 to 2014 we accepted a 2 year TOTAL FREEZE on our salary AND we reduced the quality of our medical benefits AND we agreed to pay more for those benefits. That 2 year total freeze contract ultimately saved the district about $14 million dollars. As we continued to go above and beyond what is expected of us, that FOURTEEN MILLION DOLLARS was not added to our base or awarded to us as bonuses. Instead, it was used to increase the Fund balance of the School District. In addition to all of the above concessions, we agreed to a huge reduction in tuition reimbursement–a large sacrifice for a career that requires additional coursework to obtain permanent certification. We have continued to give back financially while continuing to provide one of the best, if not the best, kindergarten through twelfth grade educations anywhere in the country.

From 2015 to 2017, our contract that just expired on June 30, 2017, continued to reflect give backs. We increased the amount we pay for our benefits while no additional money was added to the teacher’s salary steps.

It is a shame that people who give so much of themselves, have provided so much value to this community, and have given back to the tune of 14 million dollars, are continuing to be asked to subsidize their own raises. Enough is enough! The TEEA teachers deserve a fair contract. We are asking for the support of every TE family to stand with us and to tell the members of this board that enough is enough.

The June 30, 2012 contract deadline for the T/E teachers came and went with no new contract signed. Therefore, as of July 1, the School District and the teachers union, TEEA are now in status quo. This means that the T/E teachers’ salaries will be frozen at their salary level based on their 2011-12 salary until a new contract is signed.

The School Board passed the 2012-13 TESD budget in June, which includes a property tax increase of 3.3%, or .6154 mills – equating to approx. $3 million revenue. The 3% tax increase will translate to an annual increase to homeowners in T/E of about $155.

Former T/E School Board member Andrea Felkins created the following graphs with descriptions below each graph for Community Matters readers. When we discuss the benefits, salary and pension costs of the District, it is difficult for some (myself included) to fully grasp the magnitude of the situation. Through the use of the graphs, the data is more organized and easier to understand. When you view the data through Andrea’s graphs, it is much clearer the role that each of the three components play in the budget, especially as the School District moves forward. It should be noted that these graphs assume no salary increases. 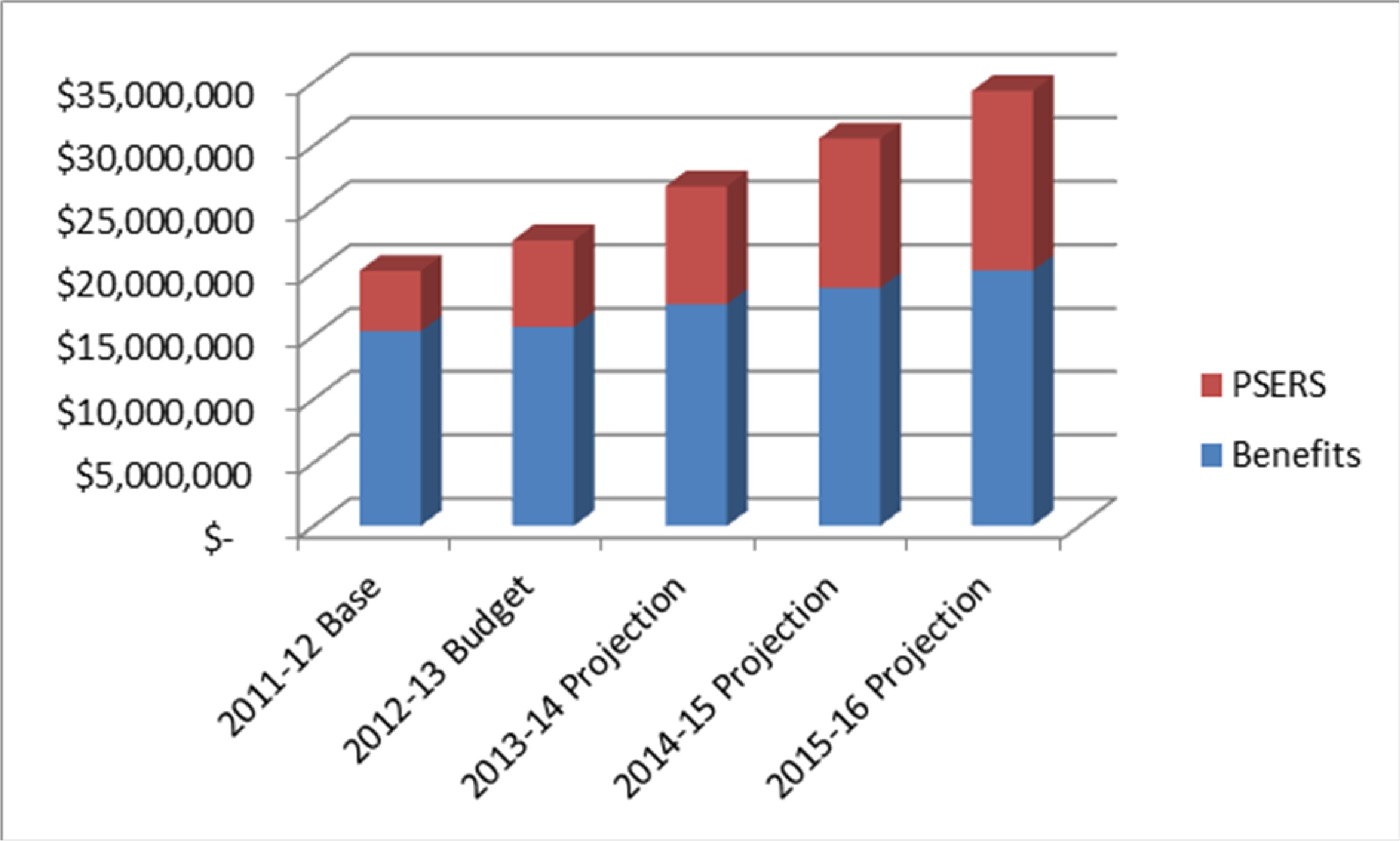 Based on the final budget presentation, this is just a depiction of the PSERS and the BENEFITS numbers for the next few years. It’s why I advocate a major change in the benefit plan – knocking $5M off the expenditures annually. 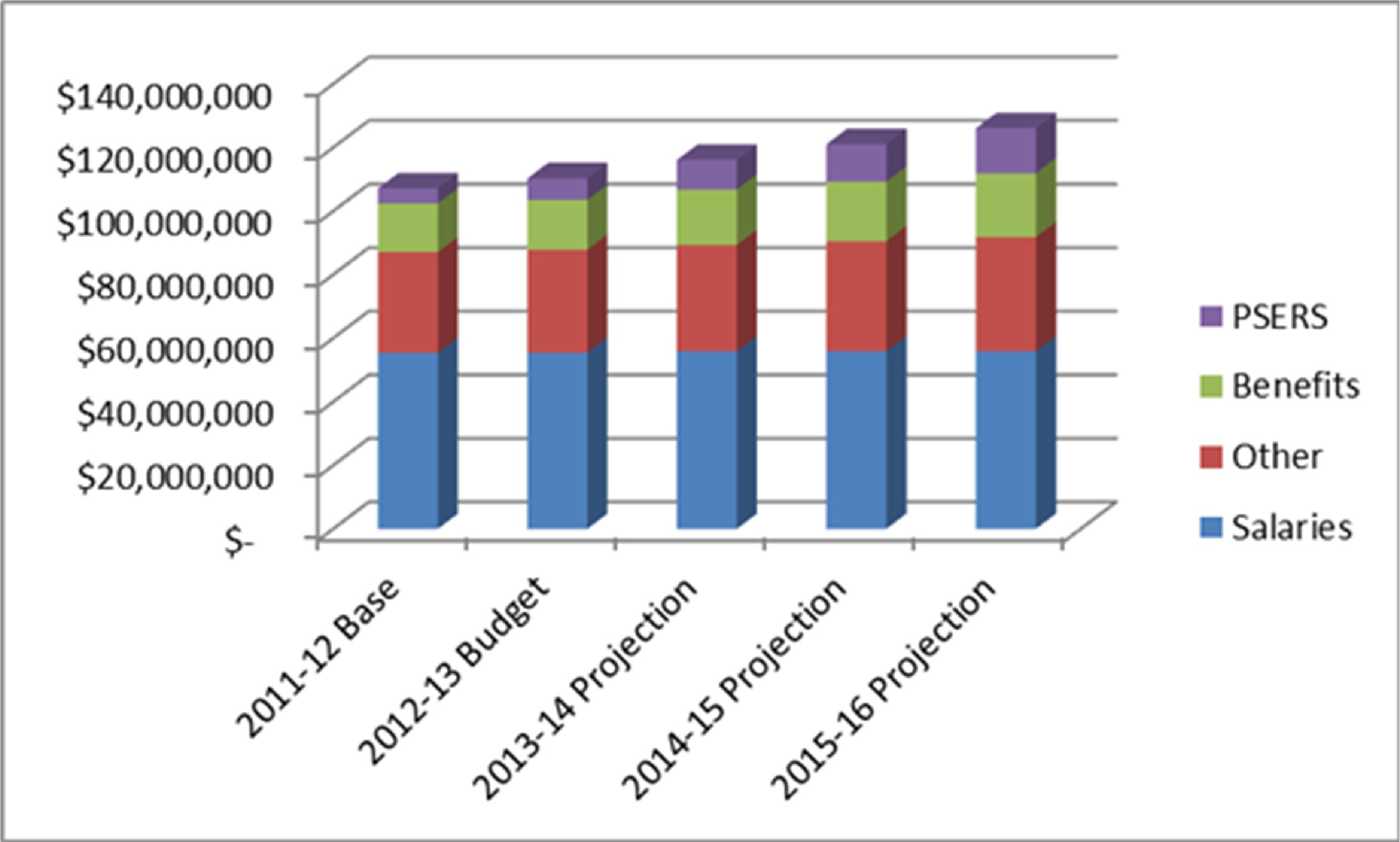 Each piece of the budget deserves scrutiny. This graph shows that PSERS takes a bigger piece each year, but the other components dwarf the PSERS costs.