I was delighted to hear the news that SEPTA has announced its 2016-27 capital program proposal recently. Among its projects that have been deemed ready for the next phase of design is the Paoli Transportation Center, a project I have had the privilege of working on as a member of the Paoli Task Force. SEPTA’s 2016-27 capital program shows funding for Phase I of the project, moving us closer toward a start of construction in 2016, as well as funding for the project’s phases thereafter for the Darby Road bridge and a parking garage. Paoli is on the move!

Coincidentally, last night was the Tredyffrin Historic Preservation Trust’s Spring Lecture Series. Our guest lecturer Greg Prichard presentation was “Pennsylvania Main Line Train Stations of Tredyffrin and Easttown Townships”. Greg spoke about train station architecture and history, mthys vs. reality, evolution and growth of the railroad in our area and how past (and future) restoration efforts helped the stations to endure. Discussing the train stations geographically from east to west, his presentation ended with Paoli Train Station. During the Q & A following the presentation, I was asked for an update on the Paoli Transportation Center and I really couldn’t offer any new information.
So, after I saw Michelle’s Facebook comment, I found SEPTA’s 2016 Capital Budget, dated April 2015 was just uploaded online. Below is a status on Paoli Intermodal Transportation Center contained in the recently released document: 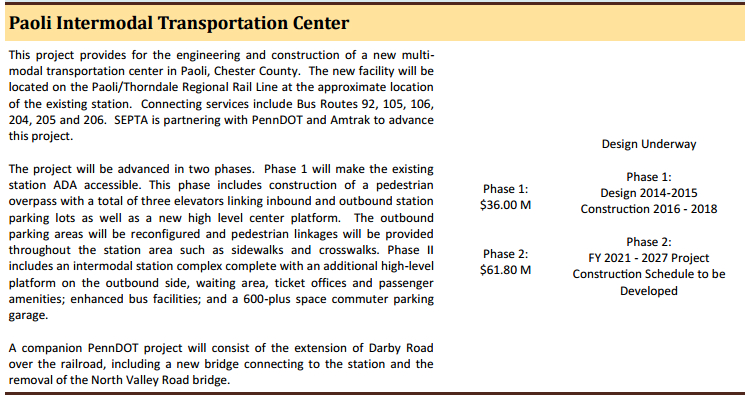 According to this graphic from SEPTA’s report, the $36 million Phase I design is underway with construction to begin in 2016. Phase I makes the station ADA accessible and includes a pedestrian overpass, elevators and new high level platform.
It appears that the “Paoli on the Move” website has not been updated in a year (April 2014) – perhaps with this exciting news from SEPTA, the timeline on the Tredyffrin Township website can be updated. It does look like the Paoli Transportation Center is taking steps in the right direction!
12 Comments

Gosh, things are buzzing at the Chester County Commission this week! There was the application deadline for the interim County Commissioner position vacated by Carol Aichele, who left for a job in Gov. Corbett’s administration. The deadline was Monday, January 30 at 12 noon – but at the close of business on Friday, there were zero applications received at the Common Pleas Court of Judges.

An article appeared in the Sunday edition of the Daily Local advertising the fact that there were no applications. Apparently, the notice did the trick and created a last-minute crush of interest! By the 12 noon deadline on Monday, there were 39 applications received for the vacancy! Upon review, six were removed from consideration because the applicants were Democrats and the appointment will go to a Republican. Although the judges hope to shorten the list, it looks like the interview process is going to be quite the undertaking!

Another item out of the County Commissioner’s Office. . . there is some unsettling news circulating about Republican Commissioner Terrance Farrell’s re-election campaign. This past November, he held a kick-off fundraiser, “A Pint of Chester County” for his campaign. The emailed invitation encouraged recipients to become sponsors with a suggested donation range of $250 – $2,500. When I received Farrell’s invitation, I found it curious that I was on his email list. Never having donated to Farrell and not knowing how they had my address, I emailed Farrell’s campaign but never received a response.

Senator Dinniman’s staff sent Mr. Farrell’s campaign a letter stating that he was allowed to send political mail to a state senate office. Dinniman reported that his office received complaints by at least three other individuals, all Democrats complaining that Farrell had sent them the fundraising invitation to personal email accounts. Farrell’s response to accusations of misusing emails for his re-election campaign — he was just keeping his constituents informed. Whoops!

Things are really getting interesting for county races . . . from DA candidates to the Common Pleas Judge candidates and now the news about the County Commissioner candidates. It will be curious how the hyperbole plays out at the County Republican Convention on February 15.

Speaking of politics . . . so, you think you know where you stand, politically speaking? Think again. A friend sent me this short test and the results may surprise and give you food for thought. You will be asked just 10 questions, and it instantly tells you where you stand politically.

The results will show your position as a red dot on a “political map” so you will see exactly where you score. The most interesting thing about the quiz is that it beyond the Democrat, Republican, and Independent.

The Quiz has gotten a lot of praise . . . The Washington Post said it has “gained respect as a valid measure of a person’s political leanings.” The Fraser Institute said it’s a “fast, fun and accurate assessment of a person’s overall political views”. Suite University said it is the “most concise and accurate
political quiz out there.”

I took the test and was not surprised to score a ‘Centrist’ label for my efforts. According to the Quiz website, . . . “a Centrist prefer a ‘middle ground’ regarding government control of the economy and personal behavior. Depending on the issue, they sometimes favor government intervention and sometimes support individual freedom of choice. Centrists pride themselves on keeping an open mind, tend to oppose “political extremes,” and emphasize what they describe as “practical” solutions to problems”.

Take the Quiz — it’s fun and will not take you more than 5 min. It would be great if you would share your results! Here is the link for the Quiz:
http://www.theadvocates.org/quiz

Today it was announced that Gov-Elect Corbett has named Carol Aichele, Chester County Commissioner to his cabinet. Carol has been named the new Secretary of the Commonwealth. This position is responsible for overseeing the state’s election system and monitoring 800,000 licensed business and health professionals. In his praise of Aichele, Corbett spoke of her role in securing three Triple A bond ratings to Chester County for its financial management practices. Her appointment must be confirmed by the state Senate.

Great Valley resident, Aichele has served as one of the three-member Board of Commissioners of Chester County since her election in 2003. She was re-elected to that post in November 2007. Her current term runs through 2011 so presumably, there will need to be a County Commissioner appointed to fill the vacancy. Any suggestions?