The Bishop Tube Co., a former steel tubing plant which produced stainless steel tubes from the 1950s until 1999 consists of 13 acres and is located off Malin Road, south of Route 30 in Malvern, East Whiteland Township. The property is a highly contaminated site with Pennsylvania’s Department of Environmental Protection (DEP) accused of neglecting the problem for decades. For DEP history and recent updates on Bishop Tube, click here.

Former owners of the site did not remove contaminants, including a carcinogen (trichloroethylene, or TCE) that was used as a degreaser. TCE has been linked to cancer and was found in the property’s soil, groundwater and Little Valley Creek which borders the Bishop Tube property. Located directly east of the property is the General Warren Village where residents suspect that the toxic substances have spread into their community, causing cancer and other illnesses.

Developer Brian O’Neill purchased the Bishop Tube property to build 228 houses on the contaminated site with cleanup required. Some neighbors fear that the planned cleanup would further expose them to the contaminants. From the start the redevelopment project has been plagued with problems — accusations of impropriety, innuendos of preferential treatment, legal battles from multiple sides and more players than one can count.

My friend and fellow blogger, Carla Zambelli has closely followed O’Neill’s proposed townhouse project at Bishop Tube site; keeping us informed on Chester County Ramblings. I suggest visiting the blog, and entering Bishop Tube in the ‘search’ on the homepage for multiple articles.

A very loud voice demanding cleanup for the highly toxic industrial site comes from Delaware Riverkeeper Network (DRN), and environmental group and its leader for twenty-three years, Maya van Rossum. In an attempt to silence and seek damages, O’Neill filed a $50,000 SLAPP lawsuit against van Rossum and DRN. Chester County Court of Common Appeals dismissed the lawsuit, however the case remains active in the Superior Court.

The Delaware Riverkeeper Network works throughout the four states of the Delaware River watershed (NY, NJ, PA & DE) and at the national level using advocacy, science and litigation.

On Wednesday, April 4, 7:30 PM at Great Valley Presbyterian Church, van Rossum will be the guest speaker for the annual meeting of Open Land Conservancy of Chester County – the public is invited. (See flyer below).

Please spread the word on this meeting — For locals, it will be a great opportunity for a firsthand update on the contaminated Bishop Tube site from someone on the front lines! 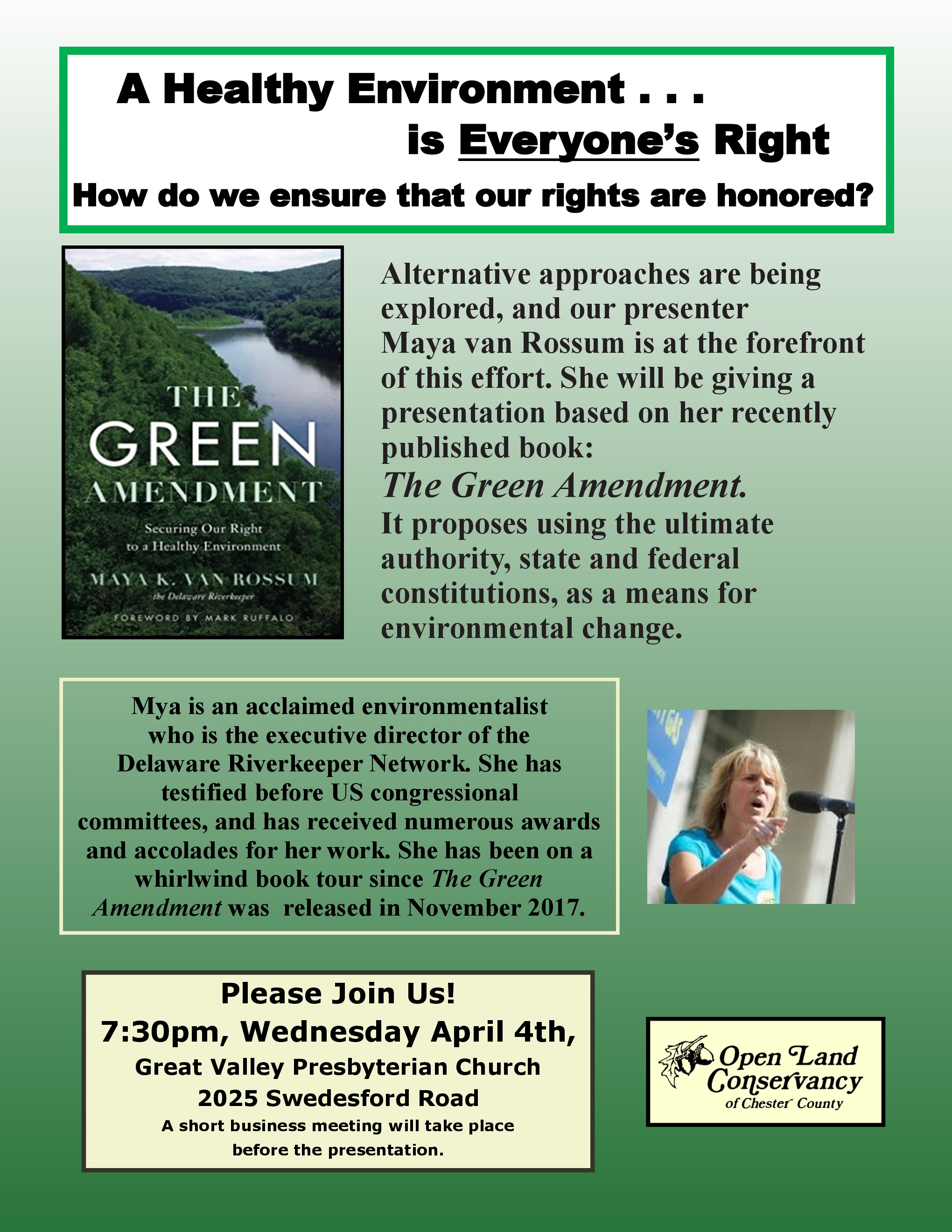 Wegmans and Target opened to much fanfare at Uptown Worthington but the battle rages behind the scenes between the property’s developer Brian O’Neill and Citizens Bank.

The latest chapter in the continuing saga of the mega-million dollar lawsuit and countersuit between O’Neill Properties and Citizen Bank has attorneys for the bank accusing Brian O’Neill of harassment against five of the bank’s top execs. O’Neill counters the accusations; claiming that the bank destroyed evidence and lodges obstruction of justice allegations.

This week Brian O’Neill and Citizens Bank are headed back to court . . . once again, the courtroom becomes the legal playground for attorneys on both sides. As the war wages on between developer and bank, the $700 million Uptown Worthington project on 106 acres sits largely unfinished. Reportedly, O’Neill Properties is feeling the effect of the recession – the payroll has dropped 50%, down from 150 employees to 75 over the last couple of years.

O’Neill’s battle with Citizens Bank is not confined to the Uptown Worthington project. The developer-bank entanglement also includes a 100-acre corporate park in Bensalem and a 400-acre residential development in North Jersey. Much like a high-profile divorce is the split between O’Neill and Citizens. For eight years, they enjoyed a good relationship with the bank offering $180 million in financing to O’Neill Properties. The economic crisis hit . . . the bank wanting to lessen their financial risk pulled out of their deal with O’Neill Properties, which left the developer without a parachute. Rather than sit on the sidelines and accept his fate, Brian O’Neill is fighting back hard and I don’t think Citizens Bank was quite prepared for their formidable opponent!

This would make a great made-for-TV movie if it were not playing out in our own backyard!

Like many people I have been watching the progress (or lack there of) of the Uptown Worthington project on Route 29 in Malvern. Back in the fall, Citizens Bank had sued Brian O’Neill and O’Neill Properties for $61 million, claiming that the company had defaulted on bank loans. Last month, Brian O’Neill countersued Citizens Bank for $8 billion in damages ($4 billion in compensatory damages and $4 billion in punitive damages), claiming that the bank wrongly called for loans before they were due and that the bank did not follow through with their end of the agreement with construction financing. With O’Neill and Citizens Bank pointing fingers at each other, I was concerned where that left the project. I feared that Uptown Worthington would just become a very expensive mud hole, and one we could look at from 202 for years to come.

The $540 million Uptown Worthington mixed-town center plan called for 752,500 square feet of lifestyle retail space, 227,960 square feet of office space, 753 residential units and 160,000 square feet of hotel space. The site location of Uptown Worthington is on Route 29, between Route 202 and Route 30 in Malvern. My real fascination with this project, beyond the obvious unfinished appearance of the 100 acre site, was the Wegmans supermarket story. A planned anchor store at the Uptown Worthington center, construction had continued on Wegmans. But after multiple delayed openings, I wondered if the grocery store would remain shuttered; a byproduct of the legal wrangling of O’Neill and Citizens Bank.

Good news. I received what I hope is official news; Wegmans supermarket is nearing completion and is set to open in June! Further good news, Wegmans has decided to model the Worthington location after the Collegeville Wegmans. Yes, our new Wegmans will have ‘The Pub’ inside the supermarket. Of the 75 stores in the Wegmans chain, the Collegeville store was the only one with a supermarket pub. This was a social experiment of sorts, connecting one of life’s most mundane chores of grocery-shopping with something that could go a long way toward blunting its misery: alcohol. I have a husband that hates running out to the grocery store, but that attitude may change with the opening of Wegmans. Wegmans will offer spirits for consumption on the premises and will also sell six-packs of beer for carryout. For the singles in the area, there’s even a chance for romance. Apparently, the pub at Collegeville’s Wegmans is reporting one engagement – with the happy couple toasted with champagne.

The Pub experiment at the Wegmans Collegeville location was intended to fill a gap in the store’s Market Café complex, where shoppers can buy prepared foods either to take out or to eat at nearby tables. The Pub is a full-service restaurant where you have a complete meal and enjoy a drink with the meal. Assuming that our Malvern Wegmans stays with the Collegeville model, domestic 12-oz beers go for $3.75; 15-oz drafts range from $3-4. Wine is $5 a glass. Cocktails – $5.25 to $10. And no tipping allowed! The notion being that you don’t tip the guy at the deli counter for a pound of roast beef. I wonder if Wegmans thinks that if you have a drink or two, you may end of running up that grocery tab. You come in, have a couple of cocktails and may buy all sorts of things you didn’t come in for.

Our new Worthington Wegmans supermarket is advertising that it will be open 24 hours a day, 7 days a week. The opening of Wegmans is just one more reason to countdown to spring!

If you recall, I have had several posts about Brian O’Neill of O’Neill Properties in regards to his Uptown Worthington project in Malvern (future site of Wegmans). Citizens Bank had secured a $61 million judgment against O’Neill in November for unpaid loans on the project.

Breaking news . . . Mr. O’Neill is taking back the ball to his side of the court. He has filed a lawsuit against Citizens Bank for $8 billion in damages ($4 billion in compensatory damages and $4 billion in punitive damages), claiming that the bank wrongly called for loans before they were due and the bank did not follow through with their end of the agreement with construction financing.

The O’Neill lawsuit alleges that Citizens Bank judgment was “maliciously based upon sham defaults manufactured by the bank in bad faith — as part of a scheme to pressure”. I am guessing that Citizens Bank tried to back O’Neill in to a corner with their demand to repay the loans. O’Neill’s lawsuit points to a couple of major problems with Citizens Bank. First, the bank was demanding repayment on the financing loans before the loans were scheduled to be due; and secondly, Citizens induced O’Neill to amend the initial loan agreements and increase the amount borrowed when they had no intention of doing so.

After Citizens Bank secured its judgment against O’Neill (in essence leaving the Worthington project without promised financing as the lead lender), O’Neill has been challenged in his efforts to find other financing. Without Citizens Bank’s financing, O’Neill has faced great difficulty in restructuring the financing required for the Worthington project. We are acutely aware that the economic climate is far different now than it was in 2002 when Brian O’Neill and O’Neill Properties began this major redevelopment project in Malvern, making this current financial situation all the more difficult for both sides. Because of Citizens Banks actions, O’Neill alleges that he has lost not only tenants but also damages to his company far exceeding the $61 million loan amount. As a result, O’Neill is seeking damages of $8 billion from Citizens Bank.

If you are keeping score, looks like the ball is in O’Neill’s court. Citizens Bank, you are up next . . .