This past week, the TE School Board voted 9-0 in favor of returning the District to hybrid instruction starting Monday, December 14. Students who selected the hybrid option would start returning to school for in-person instruction – the regular hybrid schedule would resume for all students in grades K-12.

I watched the last school board meeting and Amy Alvarez, TEEA union president and Conestoga High School chemistry teacher delivered a strongly worded statement opposing the return to hybrid instruction. Neither the school board nor administration responded to Ms. Alvarez comments and … then with little discussion, the board voted unanimously to reopen the schools on Monday, December 14.

Having personally been on the receiving end of a phone call from Ms. Alvarez in the summer, I was not surprised by what came next. By mid-week, I had heard from several people about an email to teachers from the union leadership, calling for a District “sick out” starting Monday, December 14.

On Friday, December 11, the District sent out its T/E News which confirmed that return to hybrid instruction for Monday, December 14. Additionally, all K-12 sports, including practices and competitions, are canceled until January 4. And all in-person extracurricular activities are suspended (although the activities can still be held virtually).

However, with the threat of teachers calling in sick for the coming week, TESD administration abruptly changed course at 7 PM on Sunday night. Parents received notice from Dr. Gusick and the following is posted on the District website that Conestoga High School will not re-open tomorrow, Monday, December 14: 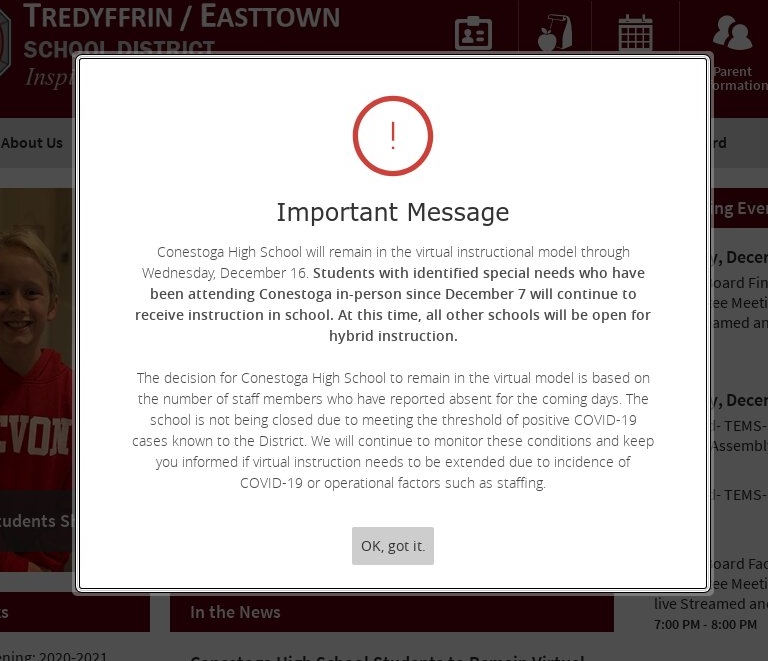 So … what is the takeaway here – the power of the union! The level of clout that the teachers union has over the District’s administration and school board is remarkable. The T/E school board voted unanimously days ago to reopen the schools, so what exactly changed in the last two days?

Without question, we are living in unprecedented times which makes communication and transparency from our elected officials all the more important. Residents and taxpayers deserve to know what is going on in our school district and who is really in charge.